skip to main | skip to sidebar

Seattle bagpiper stands on top of the world 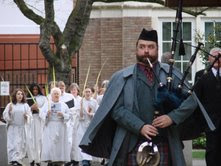 TyroneHeade, a friend of mine and a key figure in Seattle's Scottish music category, is a world champion after winning the World Solo Amateur Piping Championship in piobaireachd music last Friday in Glasgow, Scotland.

Among other things, his win is significant because, at an age, 47, when, like athletes, pipers are considered past their prime, Tyrone's skills are improving. Furthermore, it's rare to see a pipe major -- Tyrone leads the Seattle-area's Elliott Bay Pipe Band -- compete in such a distinguished international forum.

Why mention it here in a military blog?

Well, for one thing, I play the Great Highland Bagpipes (known in Ireland as the Irish Warpipes)and Tyrone has been a teacher.

But in military matters, the instruments' adoption as martial music for British forces is one reason the pipes, which date back in various forms to ancient Egyptian days and at one time were popular in different variations throughout medieval Europe, did not die out.

British general Sir John Cope's army notoriously is said in song and lore to have fled from battle with a Jacobite army at the sound of the pipes.

Cope, commander in chief of government forces in Scotland, was defeated in a 15 minute battle in 1745 at the battle of Prestonpans, when his Hanoverian-British forces were routed by the forces of Prince Charles Edward Stuart, aka Bonnie Prince Charlie.

In 1746, the Bonnie Prince and his French-backed Jacobite Scots were trounced by at the Battle of Culloden, leading to the breakup of the Highland clan system. Charlie fled to Rome never to try to regain the throne his family once held again.

A captured Scottish Jacobite bagpiper, James Reid, was the only piper among rebels hanged after Culloden in 1745, when the attempt to restore Bonnie Prince Charlie to the throne of Scotland was defeated.

While he pleaded he had not carried arms and a jury suggested leniency for the piper, Reid's sentence, now part of lore and legend, was handed down by the judge. It notoriously noted that since no army had marched without instruments, and a highland regiment had never marched without a piper, Reid's pipes were construed as "an instrument of war."

Back to Tyrone. Here's a little story I wrote today about him and his achievement.

NowHearThis
This blog picks up where the military/veterans affairs blog I wrote for the Seattle Post-Intelligencer ends. After 25 years at Seattle PI, I was among the more than 150 people laid off when the newspaper closed its print edition, and with it the military/veterans affairs blog "Now Hear This." Quite a few veterans asked me to keep it going but I had important family business to pursue. My dad, an Army retiree, finally passed away July 5 from complications due to dementia. I spent 25 years at the PI, including a stint covering the Green River serial murders. I served a hitch in the Marines 36 years ago, receiving an honorable discharge with a service connected disability. I spent 15 years as an Army brat, a tough upbringing I would not trade for the world. I have a degree from Penn State and studied at Boston University and UPenn. I also attended seminars at the Army War College and the Institute of Strategic Studies. As a reporter, I tried to focus on the human element of those who serve and their families. I'll try to keep this going and do justice to all of you who selflessly serve and served.